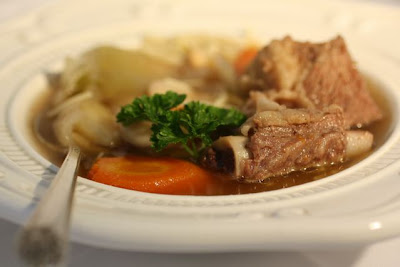 What's in a name?
The other day I was asking my Mother about recipes from the past.
Ma: Your Nana (my paternal grandmother) made excellent soups.
Me: Like what? I remember her chicken soup and borscht...what else?
Ma: Oh, I liked her meat soup.
Me: Meat Soup?
Ma: It's like chicken soup but with meat. I think I still have the recipe...
My Nana was born in Kiev, Russia 1894. The family fled to Canada when she was a young girl. Her name was Vitte but she took her sister's name, Fanny, after Fanny was killed in a machine accident. She met my Papa (paternal grandfather) when they were teenagers and their families were living in the same apartment complex in Montreal. His name was Yitzcok when he was born in Romania 1891 but changed it to Isadore upon arrival in Canada when he was 13 years old. He celebrated his Bar Mitzvah on the boat. Fanny and Isadore married then made their way to America and settled in Chicago where Papa took on the name, Irving, and they raised their children, Edythe and Leonard (my father).
I remember one day when we were kids, my Dad asked us if we knew Papa's real name. I thought about it and said "Is" because that's what Nana called him. Then I fell into a fit of giggles. What kind of name is Is, Dad? That's a verb!
My nephews are Stone Leonard, his middle name in memory of our father, and Jett Izzy's middle name is in honor of our Papa - Is, or Izzy.
Meat Soup
3 1/2 lbs. short ribs
4 carrots
2 onions
2 parsnips
3 celery stalks
1 parsley root
1 c. dried large lima beans
Egg noodles
These are the ingredients my Mother has listed on her old recipe index card from notes she took years ago while watching her mother-in-law make meat soup.
Here is how I made my Nana's soup:
Put short ribs in a soup pot full of water, heat on high until the water boils, then turn down the heat to a simmer. Skim off the scum and fat constantly. After 1 1/2 hours add rough chopped vegetables and beans. (I couldn't find parsley root so I used a bunch of parsley). Simmer another hour or so, until the beans are cooked and the meat is butter-tender and falling off the bone. Season with salt and pepper. (I also added some beef base). To serve, put cooked egg noodles in a bowl and ladle soup on top.